Celebration of Proof of Keys

January 3rd is an important day in the world of Bitcoin for two reasons:

The first Bitcoin (called the “genesis block”) was mined January 3, 2009 by Satoshi Nakamoto. Fun fact: Satoshi remains a mystery. No one knows if Satoshi is a man, a woman, or a group of people. All we know is that ‘they’ are the brains behind Bitcoin.

The Celebration of Proof of Keys. 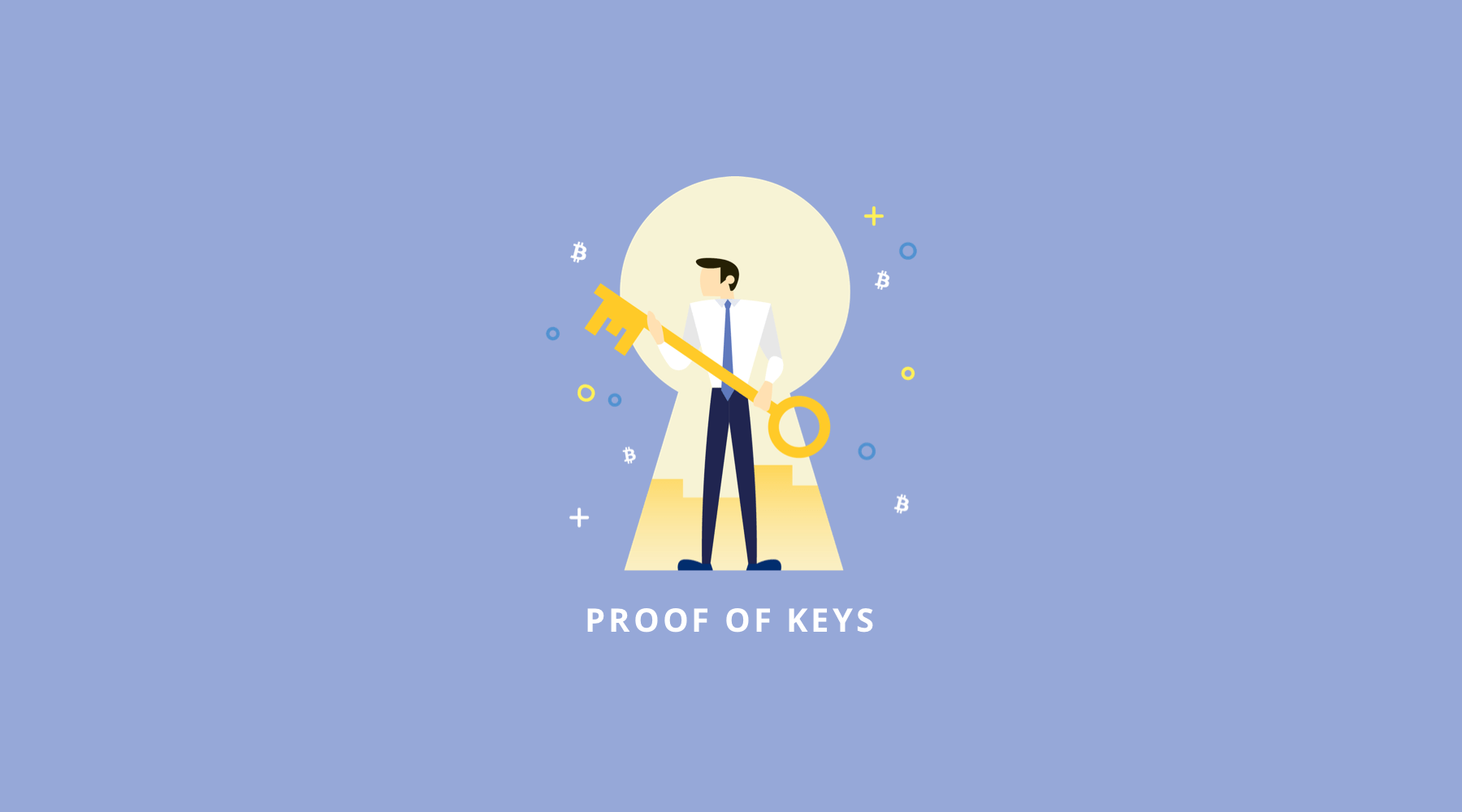 The Celebration of Proof of Keys was created by Trace Mayer, cryptocurrency investor and podcaster. We celebrate this day by pulling out Bitcoin (or other cryptocurrency) from third-party bitcoin services, and moving it to accounts that only we, the customers, control, like a personal wallet (don’t panic, I’m diving into this topic in this blog post). In doing so, we’re testing two things:

a) if the third-party companies have the amount of cryptocurrency they say they have (aka they’re not lying to us about the number of funds they’re holding) and;

b) if our cryptocurrency is intact within this third-party company (aka no one is stealing, scamming or hacking our funds

You may be wondering: “Is it a coincidence then that Bitcoin’s launch is on the same day as the Celebration of Proof of Keys?” No, it’s not. Because Proof of Keys celebrates financial sovereignty, transparency, and accountability – all big tenants of the Bitcoin cryptocurrency.

The Celebration of Proof of Keys is similar to when the economy is collapsing, and everybody is running to the bank to pull out all their money in an attempt to save their funds before the bank loses them and chaos ensues. Except that this time, instead of pulling out money in the traditional sense of the word, it’s cryptocurrency. And the economy is not collapsing. The event is pre-planned for January 3rd. To celebrate Proof of Keys, Bitcoin investors pull their bitcoin investments (or other cryptocurrency) from the exchanges they live within.

An exchange is an online platform where you can buy, sell or exchange cryptocurrency.

Once the cryptocurrency has been pulled out of the exchange, they are transferred to a safer place, like a hardware wallet (a small device that can connect to the web to transact Bitcoin purchases, and only you know how to unlock the wallet, no one else does). When your cryptocurrency lives in your wallet, you officially own the cryptocurrency. Congrats!

*Pause here, you’re probably wondering “how do I choose a wallet?” Don’t worry, you can learn more here and here.

a) Pull out the funds from the platform where you bought your cryptocurrency.

b) Transfer them to a secure wallet of your choice.

This simple exercise will probably cost you a few transactions fees, but it will prove to you whether or not you actually own the cryptocurrency you’ve bought. And whether the exchange has the amount of currency they claim they have.

“We’re going to withdraw all our bitcoin from any third party services just to prove that they’re there,” said Trace Mayer, Proof of Keys leader. Then adding, “It’s on the blockchain or it didn’t happen.”

Where are the $250 million in Crypto?

Now let’s imagine a slightly different scenario. You have money in your bank account. You go to the bank to withdraw cash, but there is no cash. The bank doesn’t have the money to give it to you. But how can they not give it to you? You know you have the money, you have savings, and you’ve seen it in your online banking. There is no reason you shouldn’t be able to withdraw cash! This is enough to cause an uproar. It’s completely unacceptable.

Until the Founder and CEO of QuadrigaCX, Gerald Cotten, suddenly died on December 9th, 2018 (“allegedly” died because there are people who believe he faked his death to pull an exit scam). When Gerald Cotten died, the company tried to pay their customers back, but they couldn’t because…

Gerald Cotten was the only one who knew where the private keys were (or the secret code) and how to unlock their customer funds to pay them. So when he died, nobody could unlock the cryptocurrency to pay their customers back. Not his wife and not his employees. As a result, people lost millions of dollars. This is why it’s important that we own our keys, where our crypto is stored and where the secret code lives.

The tale of QuadrigaCX is an important reminder for us to hold these cryptocurrency exchange companies accountable. And to remind us that our money belongs to us. That’s why we celebrate the Proof of Keys – to ensure that our funds are not locked, frozen, hacked, or stolen. And to see if these exchange companies have the amount of crypto they say they have.

If you want to learn more about all things crypto, read more here. 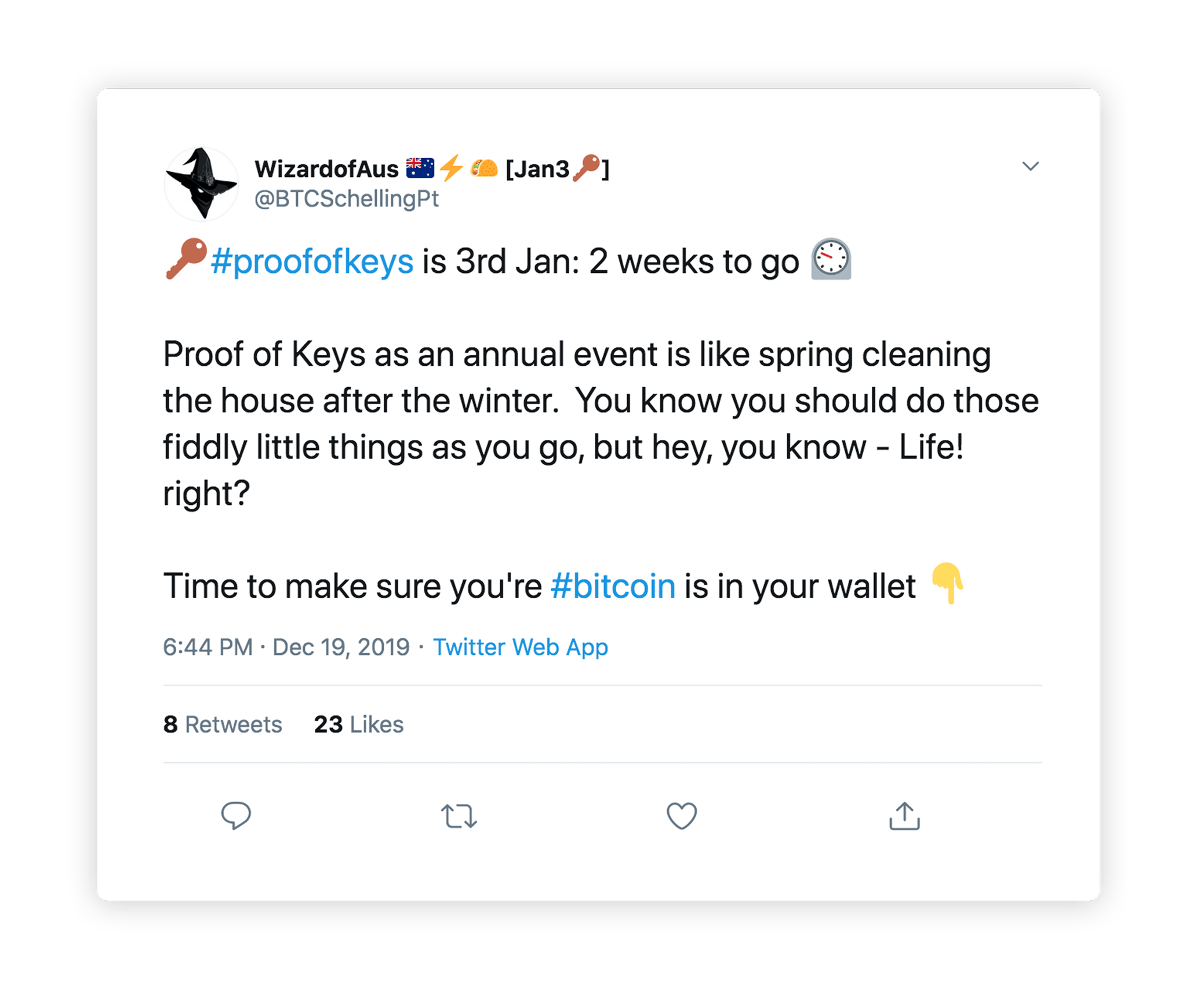 How do We Participate in Proof of Keys?

By now you already know the simplest way to participate in Proof of Keys celebration:

Transferring crypto from an exchange platform to a secure, personal wallet.

A wallet is a place that stores your cryptocurrency. There are many types of wallets: online wallets (like an exchange platform, but remember this is not the safest method), desktop wallets, mobile wallets, offline wallets (a hardware device).

You can read more on wallets here – and please do! It’s so important to do your research before deciding which type of wallet best suits your needs. You can learn tips on how to use them here and here. And remember also that the most important part of any wallet is keeping your keys (secret code and passwords) as safe as possible because if you lose them, you lose access to all the cryptocurrency stored in there.

Finally, the Proof of Keys Celebration reminds us that:

a) We should be in control of our own private keys.

b) To take cybersecurity threats seriously, how to create a bitcoin wallet and make transfers securely.

c) We should test that cryptocurrency exchanges have the amount of crypto they say they have.

Above all, Proof of Keys is meant to remind us of this critical lesson: we only own the asset if we can control our own private keys. We must take responsibility for our own financial sovereignty.

“Anyone who doesn’t want you to hold your own private keys – they’re your monetary enemy. They don’t want you to be free and independent with your money,” Mayer adds. “That’s just the way it is.” – Trace Mayer