Staking 101: How Using Cryptocurrency to Secure Blockchain Networks Can Make You Wealthy

More and more cryptocurrency projects are using proof-of-stake consensus algorithms to validate transactions and secure the peer-to-peer exchanges of value that Bitcoin, Ethereum and every other blockchain projects in the world of digital currencies help facilitate. In order to further understand why proof-of-stake algorithms is taking over the space, it’s important to understand what achieving consensus means, the different methods different projects used to get there, and then go deeper into how you as an investor can grow your wealth significantly by contributing to cryptocurrencies that use a proof-of-stake mechanisms.

While there are thousands of cryptocurrencies available for trading within the crypto market today, the two most valuable projects on the planet, Bitcoin and Ethereum, are known for using two different consensus algorithms. Bitcoin uses proof of work while Ethereum is in the process of switching to a proof-of-stake model, and many other projects like EOS and Tezos already use a proof-of-stake approach. 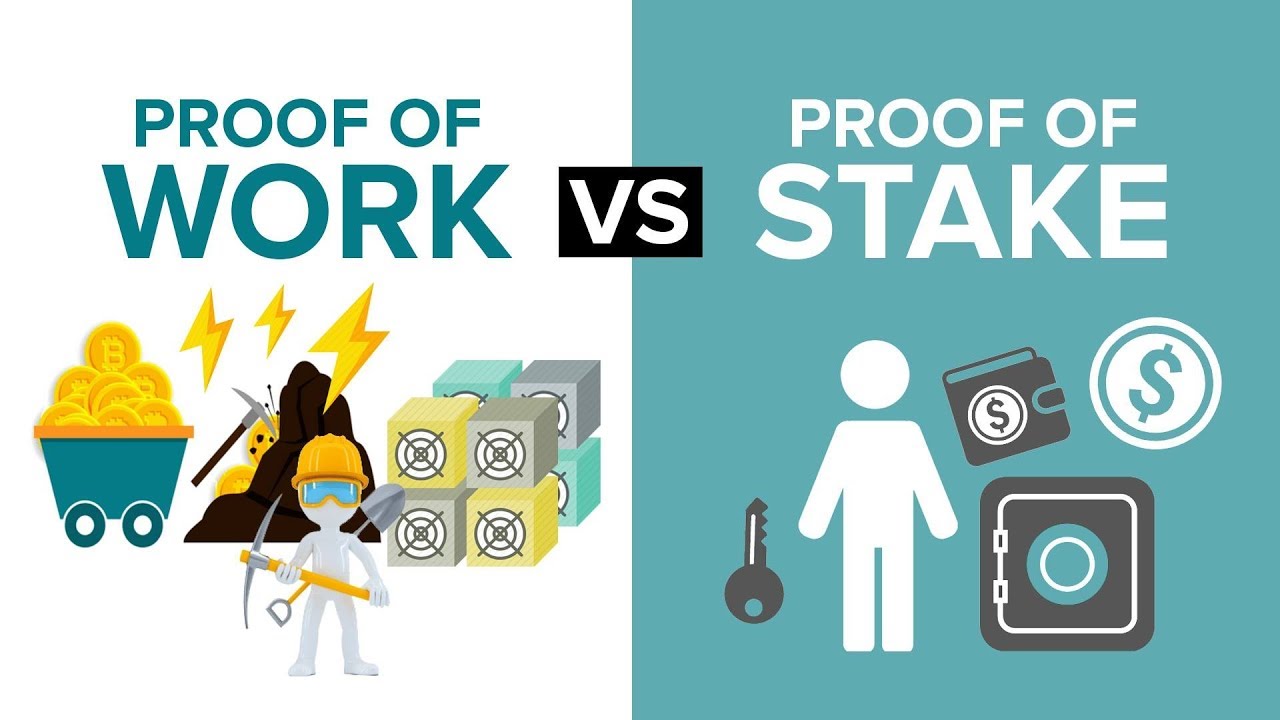 Bitcoin validates transactions by asking users (referred to as miners) to solve complex computational problems and use cryptography to secure transactions. Transactions broadcast on the Bitcoin network and they get pooled into groups called blocks. The miner that manages to solve large volumes of transactions fastest gets rewarded with Bitcoin as payment.

The great thing about the proof-of-work consensus algorithm is that it prevents malicious actors from double spending or counterfeiting bitcoins and allows all participants engaging in peer-to-peer transactions to do so without worrying about a centralized authority like a government or a bank having to take control or oversee the value being transferred between one another. After all, the details of these transactions exist on Bitcoin’s blockchain, a public ledger that everyone can see.

There is one inherent problem with the proof-of-work algorithm however, especially in the case of Bitcoin. Since the ability to earn rewards is directly tied to how much computing power you have access to, those with the most computing power tend to have the most say in what happens next on the network, and they tend to earn the most rewards. This means that a large mining company can theoretically gain control over more than 50% of transactions on the network, which means that company would then have oversight over the majority of transactions.

In 2009 when Bitcoin’s genesis block came into being and the average person could mine new coins using only a laptop, the pitfalls of a proof-of-work algorithm were simply not as obvious. Today, Bitcoin’s blockchain is so large and the ability to mine new coins is so much more difficult that only major players with access to lots of capital in computing power can participate. On top of that, large-scale proof-of-work mining wastes a ton of electricity and computing power. That’s why in the eyes of many it’s not nearly the most efficient or effective way of securing a blockchain. Enter proof-of-stake algorithms.

The concept of proof-of-stake as a means for achieving consensus was first proposed by a user on BitcoinTalk.org, arguably the world’s most popular online cryptocurrency forum, back in 2011.

As noted above, proof-of-work consensus algorithms afforded miners with the most computing power the opportunity to earn the greatest rewards, which in the long run centralizes control of the network and wastes a ton of energy.

Proof-of-stake algorithms allow validators (another word for miners) to validate transactions by simply offering up their holdings as collateral in a sense. If a validator approves a fraudulent transaction, they lose a portion of the coins they are staking to the network. If they do a good job of only approving transactions that are perfectly valid, they get rewarded the fees associated with the transactions tied to the block they are validating.

Yes, this does mean that somebody with more money can gain access to more rewards, but it’s still better than using a proof-of-work model. The reason for that is because computing power gets cheaper as you buy larger and larger quantities of it, meaning that you can squeeze out smaller miners in a proof-of-work driven network where computing power is the deciding factor. In a proof-of-stake network, validators are not only incentivized to approve valid transactions, but also face consequences for approving fraudulent transactions.

To add to that, most proof-of-stake implementations make it so that the validator for the next block is chosen at random. While it’s true that a validator staking more crypto to the network is more likely to be chosen, the fact that it’s random makes it impossible to game the system.

The fact that proof-of-stake models use less electricity and computing power helps level the playing field and keeps the process efficient. 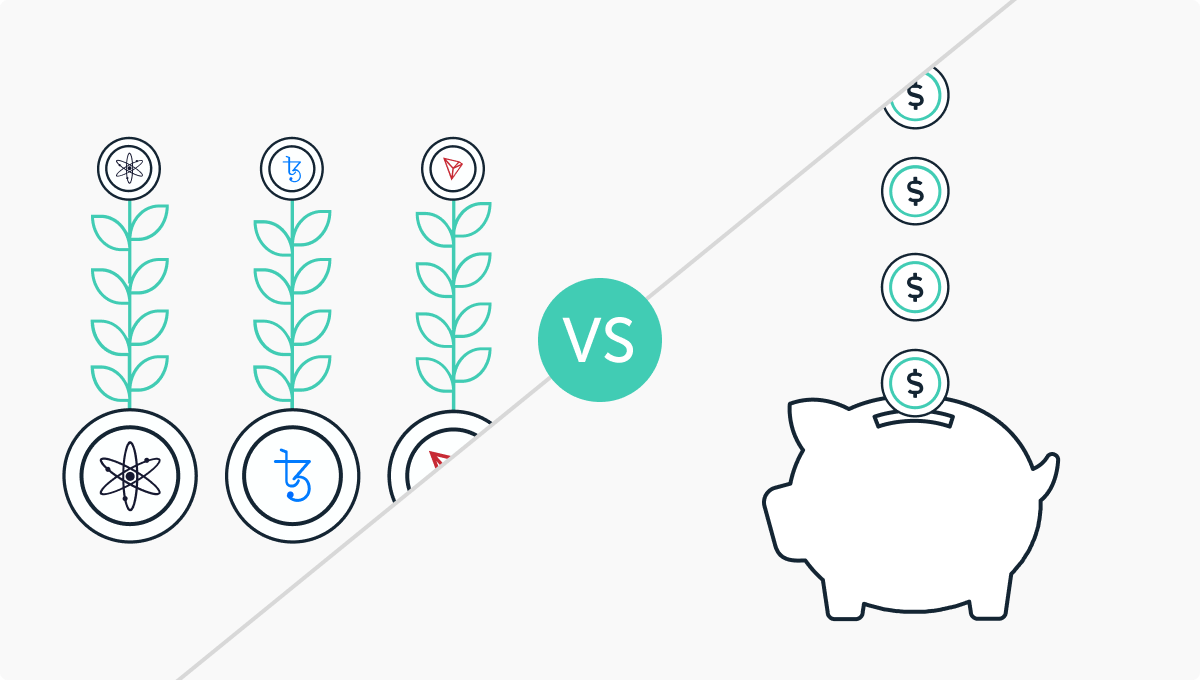 How To Grow Your Cryptocurrency Holdings with Staking

Now that you know the difference between proof-of-work and proof-of-stake consensus algorithms and the advantages and disadvantages of both, it’s time to talk about the one key advantage of proof-of-stake algorithms you probably care about the most. The ability for a progressive investor like yourself to make a profit. Since staking means using your crypto holdings to secure a network, you have to declare yourself a validator/contributor.

Generally speaking there are three different ways you can do this and earn rewards. In order to explain these three options we will focus on the Tezos project specifically because the nuances of staking can be different from project to project and it’s hard to discuss the principal methods of doing so in a bubble. This goes beyond the scope of knowledge that even many intermediate crypto investors have of the space. But will try our best to explain it nonetheless.

Staking via a cryptocurrency exchange in Canada is a service that is still evolving, but many top exchanges will handle it for you. The thing with leaving crypto on a centralized exchange is that if the exchange itself gets hacked, you can lose all of your money and most exchanges won’t take responsibility for this. The upside to staking your coins with an exchange is that all you have to do is hold them in your wallet, click a few options to enter into a staking agreement and voilà, you’re earning interest on your tokens.

There is a catch however. The catch is that for the convenience of being able to stake right on a major crypto exchange with an easy-to-use interface is that you will likely earn less interest than you would if you used a delegate through a hardware wallet or decided to do some coding on your own computer to join the network as a validator. Earning extra interest means going a bit deeper into technical knowledge. That’s where options two and three for staking take the stage.

Staking Option #2 Delegating Your Tezos to a Pool

Just FYI, in the Tezos world, staking is called baking, but the idea is the same. Delegates that stake your Tezos for you are called ‘bakers’. Just like using a cryptocurrency exchange, you will have to pay fees to the bakery in order to participate. But since you’re willing to go the extra mile of looking for your own baker, you actually come out a bit further ahead in comparison to going to a major exchange. Where a baker may charge you 5% to 10% of the rewards they earn for you just for participating, crypto exchanges can take as much as 25%, which is a lot.

The added benefit of researching your own baker to stake tokens to is that you can do it through a hardware wallet like the Nano Ledger S, and the Tezos network makes it so that if you choose to leave a baker, you can get all your coins back at any time. And there is never any risk of you losing all of your Tezzies. The baker never gets your access to private keys.

One thing to note however is that bakers can make mistakes validating transactions, so you have to do the research to vet them for accuracy. Also, you have to bake your tokens for a minimum of 40 days in order to receive a return. Vetting bakers means checking out a website like MyTezosBaker.com and parsing through details about the accuracy and fees associated with working with specific bakers. But there are many options out there and you don’t have to meet any minimum deposit requirements so you can test out a bunch if you like. 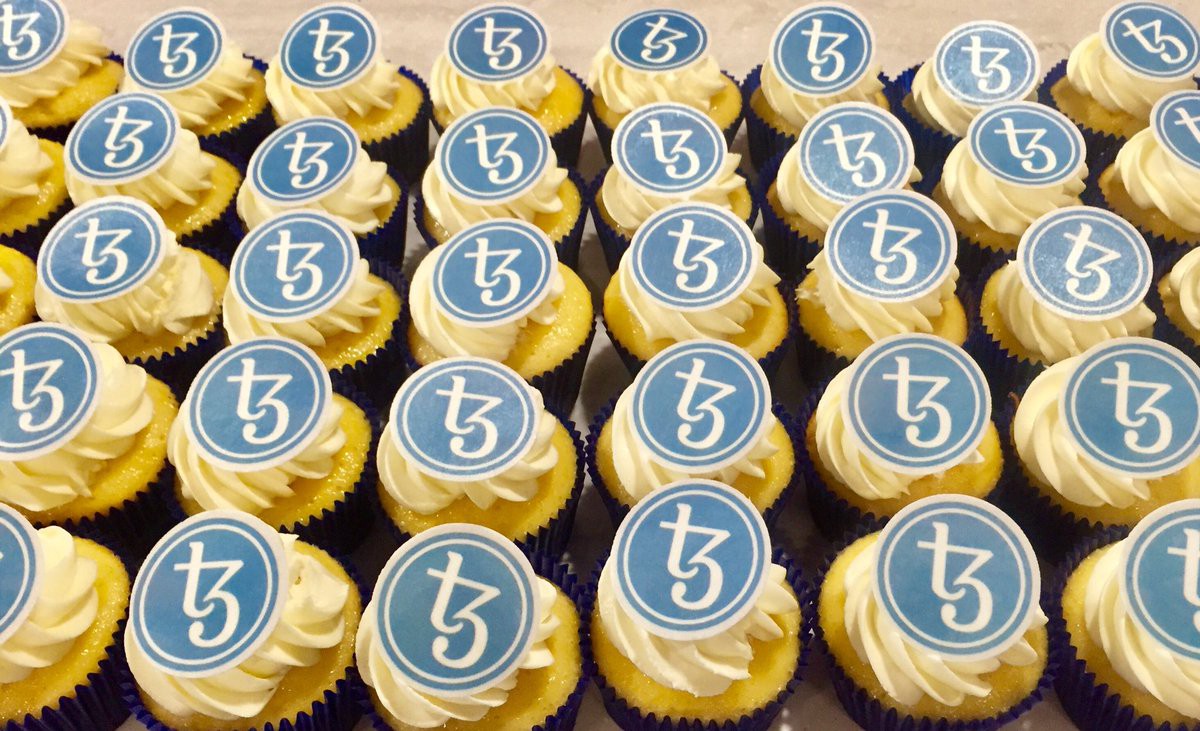 Staking Option #3: Staking Tezos on Your Own

This is by far the most technical way to stake your tokens. The advantage is that you have full autonomy over your tokens and thus you reap all the rewards. The downsides are also obvious and definitely real. You can easily lose all of your tokens if you don’t know what you’re doing, and you actually need to meet a minimum requirement in terms of the capital you are offering before you can bake your Tezzies.

The minimum requirement for baking on the Tezos network is 8,000 Tezzies. If one token is worth $3.50 Canadian, that means you’re putting up $28,000 worth of tokens in order to earn a steady annual profit paid in tokens.

In order to set this up you need to be comfortable with programming language in MS Dos or Mac’s Terminal. We’re not going to explain the details here, but at least now you have a better understanding of why most progressive investors will go with the first two options. Even if you have basic programming knowledge, odds are you wouldn’t bet $28,000 on your skills necessarily.

How Much Can You Earn from Staking?

Someone with the knowledge and capital to bake Tezzies directly on the Tezos network can make 6% or 7% per year. In contrast, the stock market returns an average rate of 10% per year. So why would you want to spend the time to bake Tezzies? Because when you participate in staking cryptocurrency, you’re earning your annual yield in tokens, not dollars. Fiat dollars don’t fluctuate very much, but if you happen to earn 500 Tezzies a year and the value one Tezos token skyrockets up to $10, you just made $5,000 in a year. That’s way better than any bank will ever offer you and the risks can be minimal if you choose to delegate to someone else.

The Future of Staking

One of the reasons we’re only talking about Tezos in this post is because other altcoins, like Ethereum and Cardano, are still in the process of introducing their staking mechanisms to the world and making them available to individual users. But in the crypto world where decentralized finance and yield farming are the order of the day, staking is probably one of the safer ways to compound your crypto holdings.

What’s exciting about the whole idea is that not only will you earn interest for supporting networks you care about and grow your holdings, but staking also removes coins from circulation, which in turn means each token that you hold onto is worth more, because everyone else is holding onto their tokens too.

If you’re already growing tired of investing in yield farming coins where the average investor doesn’t know if they are actually participating in an exit scam, consider signing up for Netcoins today. Cryptocurrencies after all are meant to put the power back in the hands of the individual.

May all the profits be yours!